Get a sneak peek of the new version of this page.
Check it out now Learn more

A teenage girl and her father travel to a remote alien moon, aiming to strike it rich. They've secured a contract to harvest a large deposit of the elusive gems hidden in the depths of the moon's toxic forest. But there are others roving the wilderness and the job quickly devolves into a fight to survive. Forced to contend not only with the forest's other ruthless inhabitants, but with her own ... See full summary » 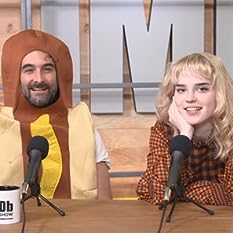 Jay Duplass Shares Why 'Prospect' Required His Best Acting Yet

Sophie Thatcher Spills on Auditioning for Her Role

It's a story about a father and daughter who go to an alien planet to do some prospecting. That's all you need to know, and should know, as there are some plot twists that should be left unspoiled. Trust me.

The movie's well directed and written, besides some clunky dialogue in spots, and the world is artfully rendered. It's made on a budget, so there aren't any extravagant sets or creatures, but it does feature lived in, authentic looking technology and an atmospheric alien environment (reminiscent of Annihilation, but a tad more Alien).

The performances were all very good, Sophie Thatcher and Pedro Pascal, being the standouts.

The filmmakers really wanted Andre Royo for the film after watching him in 2002's The Wire (2002) as Reginald "Bubbles" Cousins.

The IMDb editors are anxiously awaiting these delayed 2020 movies. Check out what we'll be watching in 2021.