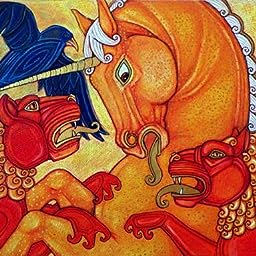 Danny Boyle takes on the Indian trinity and delivers the year's best picture.
Slumdog Millionaire is a cinematic typhoon of chaos, corruption, betrayal, chance, and romance. The foul world depicted in this film rivals the violence, the poverty, and the filth of another impoverished world, that of Fernando Meirelles and his magnum opus, City of God.

Danny Boyle takes some great risks by making a movie in Hinglish, sans Hollywood stars, with a story revolving around a television game show of all things. But it works. This modern folktale works exquisitely.

The cities of India depicted in Slumdog are Boyles's leading characters. Anthony Dod Mantle captures the light, the color, the dirt, and the energy of these antiheroes with an eye that doesn't flinch.

Boyle does wonders with his amateur actors and his actors don't fail him. Dev Patel gives a notable performance as Jamel, who is the Indian trinity of pathos being an orphan, a Chai-wallah, and an untouchable. The Academy needs to take proper notice. Jamel's affection for Latika leads him through his odyssey that will go into the canon of great romance films, (Casablanca; The Princess Bride; The Constant Gardner; and The Fountain), where the hero sacrifices his freedom, his life, his honor, and his dignity for his love.

Boyle takes the standard boy meets girl, boy falls in love with girl, boy flirts with fate in order to get the girl formula and keeps the formula vivid and vital by amongst all things dowsing his protagonists in dirt, crap, and unbridled class prejudice. He does so not out of some kind of masochistic fervor held against his characters but out of deep respect for these spirited souls who will try and triumph at all cost.

A warning must be given to those who are squeamish. Beware of several flinch worthy scenes: torture; violence against children; and one infamous crap scene for which I will not waste your time writing about as you probably already know about it.

An Unexpected Surprisingly Intelligent End of the World Flick.
[] Quite unexpectedly so, I found myself 25 minutes into watching the film, finding myself in need to witness this film to its conclusion whatever it maybe.

First, I must confess being of a skeptical mind, I expected a happy go lucky, feel good film, that would end with Gregory Peck saving the world, 'ya know' the stereotypical tripe that 'unholingly' [sorry for my own coined word] born from Hollywood.

I expected that the war would be the proverbial "elephant in the room which no one talks about" throughout the entire film. Then this 'bomb' was dropped by the guilt riddled, self hating scientist, Julian Osbourne, played impeccably by Fred Astaire, (which was the first time I have ever seen him in a film).

Small details made this film great. The fact that barely anyone in Australia drove their cars, resorting to bikes and horses, due to the obvious 'petrol' shortage now that OPEC would have been obliterated in the war; The false alarm regarding the San Diego telegraph; The use of cyanide pills for suicide; the inevitable ending.

Each character is a complex, real human with his or her own ambiguous flaws, who honestly and realistically reacted in their own manner to this nightmare worst case scenario.

A FAR MORE DARK, COMPLEX AND WORTHWHILE FILM TO WATCH AND OWN ON DVD.

8 Singing Amateur Sleuths?
This film was the most oddballish of French cinematic constructs, (Its a musical comedy, a murder mystery, a social and sexual satire, a high brow soap opera, and shockingly its a musical), I have ever seen.

To put it up front, 8 Femmes is a musical! Yes! A musical! Spontaneous songs are sprung throughout the film. Each of the 8 women in the film has her vocal spotlight in the film. No complaints as all 8 women have great and unique voices with songs that though sometimes may seem out of place storywise do give the characters depth. Lest I forgot to mention that during the singing parts of the film the on looking characters (those not singing) often broke into some oddly highly coordinated and choreographed dance sequences. A bizarre and odd French take on an MTV music video ~ no make that VH1 given the nature of the songs and music are for older generations.

A satire of soap operatic proportions, high brow soap opera that is! Class warfare is waged between the servants and the family of the house, especially involving Catherine Deneuve's character. Even if I tried to count, I could not give you an accurate account on how many plot and character twists had taken place within the 2 hour film, (not necessarily a bad thing being a satire of a non-existent genre(do high brow soaps exist?))

The film focusing on love, sex, and romantic scandal takes the soap opera genre and has its illegitimate child fathered by the murder mystery genre. This murder mystery was definitely of the Grand English Murder Mystery heritage like Agatha Christies "Then There Were None" or Ten Little Indians as it lambasted that subgenre and quite successfully at it.

The technical cinematography of the film was literally brilliant thoughout the movie with the exception of 2 lusty jazzy songs one by Madame Chanel (Firmine Richard) and the other by Catherine D.'s Gaby character. Colors were oddly bright and rich, NOT THE USUAL GREY AND GRIM associated with murder mysteries. Each of the characters had her own flaws and idiosyncrasies and it was great how these flaws were exploited by each other! It seems obvious that the exaggerated soap operatic intentions were intended so that the acting was deliberate, exaggerated, and sometimes a bit over the top as well. Fine jobs to all for what this type of movie called for.

The Best Faces and Gestures of Louis de Funès

Movies About Going to the Movies

Your Favorite Aspect of "Squid Game"

Words of Wisdom by Marisa Tomei

Close But No Cigar: The Men Who Weren't Bond