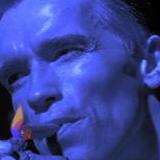 A gift to moviegoers
On a whim, I bought a copy of this movie for an Arnold marathon I was having with some friends. Not expecting much, you understand, because everything I ever heard about it was how disappointing it is, what a resounding flop, what a misguided exercise in futility.

Well, you people who misled me, SHAME! Last Action Hero became instantly my favourite movie. I couldn't believe what I was seeing. It was like somebody scanned my brain and put everything onto the screen that I ever would have wished for. It's an outright masterpiece.

If you were ever a thirteen-year-old boy obsessed with action movies (and the occasional highbrow fare, like, say, Amadeus), this movie gets it. It gets exactly that feeling of excitement watching mayhem on a movie screen. It knows that your mom doesn't understand, that your teachers wouldn't approve. It was clearly written by somebody who's been there.

It's also a celebration of the absurdity of this kind of entertainment and never wags its finger at you for enjoying it.

Arnold turns in the best performance of his career playing a parody of his usual heroic characters, a parody of his actual life (badgered by his wife as he relentlessly plugs his gym and his restaurant) and even a parody of Hamlet. Because why shouldn't he?

Giving him a kid sidekick who's just joined his movie from out of the real world is absolutely ingenious. It lets us in the audience live out our dream of joining in, being a superhuman hero, saving the day and getting a big kiss from the leading lady. It also brings out some surprising emotion that fits perfectly in the story of a kid who wants to be something extraordinary and his idol, who wishes he could make a real connection outside of his fantastical world. Jack Slater talking about his regrets and promising Danny that he'll "be here where you can always find me" are enough to bring me to tears every time. Last Action Hero really gets its fans and where our hearts are.

The most perplexing thing of all in the film's legacy is the number of criticisms you'll come across decrying things that are completely deliberate on its part. Like the "real" world and "movie" world being too different from each other. Gee, do you think that might have been the point? Or Arnold just playing an exaggerated version of his own persona. Hm, you don't say? The plot being confusing. I don't know where to start with that. It's a perfectly straightforward fantasy story about an ordinary person gaining entrance to a magical world. It's the most classic story structure you can imagine.

I honestly think those who don't relate to the message of big-hearted enjoyment, spectacle and laughs were just never meant to get it. And that's okay. We get it to have it to ourselves.

This is a movie that just loves being a movie and loves us for appreciating that about it. And if you don't get that, I don't know how to help you.

What a gem!
I finally gave this movie a chance yesterday and, let me tell you, I was in no way prepared for how great it is. It does not have the reputation it truly deserves, that's for sure. Firstly, what an amazing premise: that a dangerous criminal wakes up in a utopian, nonviolent future society where taking over is a piece of cake for him. A world in which the police can't begin to deal with the threat of a single maniac because their training consists of asking their communicator device for help and being told to use a firm tone of voice.

Everything about the ultra-sanitized future California environment is hilarious, especially because no matter ludicrous it gets, it always manages to still feel like something certain politicians would actually advocate for. It's completely insane and also eerily plausible, which is a terrifying combination.

A very cheery Sandra Bullock is on hand to talk us through the rules of polite society in 2032 San Angeles. I have to admit I've often discounted her as an actress, but having delved a bit more deeply into her career, I'm fast becoming a fan. She plays the airheaded enthusiasm so effortlessly; it's a brilliant comedic performance. Sylvester Stallone, meanwhile, can convey with a few eye rolls what needs to be said about how his character fits into this world. The contrast between them makes for some great humour and their relationship never feels forced at all.

Wesley Snipes isn't a particularly scary villain, but I'm not taking any points off for that because I honestly think it's wholly by design. The tone of the movie is lighthearted and satirical and Snipes plays his villain with a relish that easily rubs off on the audience.

I think it's interesting, incidentally, that you can make a trilogy out of three of my favourite sci-fi/action movies based on the fact that their plots all include a wrongfully imprisoned hero who finds that the terms of his release are actually in service of the main villain's plan to pacify society. The first two are Escape from New York and The Running Man. They all share a pretty similar cynical outlook and, if you watch them in order, get progressively more humorous, almost as if this business of commenting on social developments is getting more absurd by the day. Funny, right?

In any case, Demolition Man is an absolute joy: funny, prescient, action-packed, surprisingly sharp and shamefully overlooked. An underrated classic.

Proud to be Irish