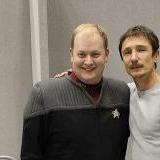 A much needed new start
If you are a Star Trek fan who does not like change this is not a film for you. This film marks what I hope is a new beginning for Star Trek. It takes a well established idea and makes something new of it. This is essentially a complete reboot of Trek. So you have to look at it with that in mind. This film in no way tries to fit in with "canon" or established events. The essentials are there, Kirk and crew, the Enterprise, good guys, bad guys and of course red shirts! This film is something anyone can go and see. You only need to have the faintest idea of Star Trek to follow the film. Even then, the film does a good job and introducing you to the characters. The script is first rate, serious when it needs to be and humorous at the right moments to relieve tension. It begins right away with a brilliant opening teaser that will tug at the heart strings of the most hardened moviegoer. The special effects are second to none, although director JJ Abram's over use of lens flare and camera shake is a little annoying. The casting is perfect. The selected cast fill the very big boots handed to them very well.

This film is very much the blockbuster the Star Trek franchise so badly needs.

Lawyer munching Dino fun
The summer of 1993 was a summer of change for me, there was a lot going on in my life. Yet, amongst the hubbub of moving house and country, starting a new school and moving house again, I began to see more and more ads for a film called Jurassic Park. I slowly built up a picture of what it was about and, by May 1993, was convinced that I had to see it. The whole premise of the film and the pictures from the production of it captured my 13 year old imagination hook, line and sinker.

It wasn't until a good 3 weeks after it first showed in UK cinemas that I got to see it.

And, it was worth the wait. The effects were mind blowing. The Dinos were so realistic it was hard to tell the difference between real and computer generated. Even today, the same still holds true.

The musical score is one of the best I have ever heard. Even today, a full 14 years after I first heard it, the music still inspires me to watch the movie, each time I hear it.

OK, so the acting can be questioned. But the actors and their performance are, in my opinion, secondary in this movie. The real stars are the Dinos and boy... they gave a perfect performance.

This is a movie I am glad to have been around for to see on the big screen because (as with just about every film) the film looses a little of its presence and magic on the TV at home.

A highly recommended movie for anyone who has not seen it yet. And, in my opinion, one of those movies you just have to see before you die.

Its not so bad really
Well, I personally don't see what's so bad about this film.

One of the better parts of this film is a scene which many of us who follow Star Trek have always wondered what it would be like, and that is of the Bridge of the Enterprise taking a direct hit, blasting a nice big hole up front. I have long wanted to see this rather obvious target atop of a federation starship get hit. And this film delivers such a moment. It is, as I had hoped, a spectacular moment.

Another Star Trek first, in terms of detail of the event, is an on screen ramming of two capital ships. There have been many moments in the series and films where a ramming was ordered by the Captain of the lead ship, yet it is always averted at the last moment or the actual event was a small clip of the ship hitting something and everything glows as hot as the sun then disappears. Finally, in Nemesis, we see the Enterprise ramming the Scimitar. And it was another spectacular moment. Finally we get to see what such an event would do to either ship and what it looks like. And for the hardened fans out there... YES I know about Voyager ramming the time ship, but that was just a large explosion, nothing as spectacular as seeing the Saucer section of the Enterprise slowly carve into the Scimitar.

Sure, the storyline could have done with more essence and be a little more complicated, but I think that on the whole, it was fine. Anyone could go see Nemesis. Anyone. You don't need any previous knowledge of Star Trek to follow it and that, I think, is what the Director and his team were aiming for all along.

Superb flick with just the right amount of action
I can't fault the movie, but perhaps I'm simply biased.

I was introduced to this movie at the age of 12 in the spring of 1992. One of my friends from back then was a history buff who especially loved all things about war and battles. No surprise then that he had the VHS the moment it was available.

Seeing it for the first time on his small 12 inch TV, sat crooked necked on his bed, I enjoyed every minute of it.

Today, the music fills me with emotions as I listen to its superb soundtrack. By far the best moment is after Shaw is killed and 54 charge up the embankment fuelled by rage. The music at this moment is powerful and stirring.

The film also depicts the human element very well and tells the story of just what those men went through and the punishment they risked just to get a chance to fight.

An excellent movies which must absolutely be seen.

Recollecting the "Soldier Soldier" years
Soldier Soldier was truly an excellent drama series for its time. It is a pretty accurate portrayal of Army life. I can say this from certain as I have 13 years of personal experience. At the time Soldier Soldier began showing on ITV and the BFBS (British Forces Broadcasting Service), my Dad was in the British Army and we were living on camp with him in Germany.

The series really hit home for us as our family was precisely like the families you see in the series. Wifes and Children following the Soldier from posting to posting, sometimes separated for long periods due to exercises or overseas action.

The community spirit and the bonding together to help that the series depicts between the soldiers wife's and offspring is true to life.

The depiction of British life in Germany was spot on. Again, from direct personal experience, I can tell you there was and still is a microcosm of British culture in Germany around Military installations and their surrounding towns. Its different to Mainland UK life, yet recognisable. A new Army wife was able to quickly fit in and I guess its still the same today. Soldier Soldier brought this culture to the TV screen.

Dad would often tell me that every regiment and squadron had characters like Tucker and Garvy. General jokers and mischief makers. There was also always an officer that was a hard ass and thought he knew it all. Then you had the compassionate and the down to earth types. And of course, the people you'd rightly give your right arm for to help them. Soldier Soldier successfully depicted the whole spectrum of these kinds of characters, the bonding that occurs between Soldiers and the way that Squaddie mates will do just about anything to help one of their own. Likewise the families attached to them.

As with any program, there were a few moments where there were differences between reality and what was on the show, but one has to allow for some artistic and dramatic licence, or else you might as well call it a documentary.

I miss Soldier Soldier, above all, I miss the life it depicts, for despite the downs, the ups were far more numerous and the life was good.