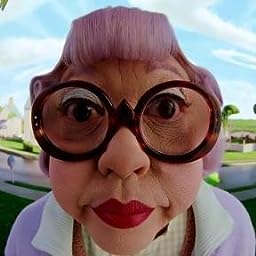 Better than the Minions.
Despicable Me 3 is the third movie in the Despicable Me series. After the absolutely atrocious Minions movie, it made me wonder if this movie could stack up. And it's pretty good. Nothing that special, just...pretty good. It's not terrible in all means, but one of the movies main flaws is that it fails to explain key questions a viewer may have. For instance, it's never explained why Clyde is an actual robot if he was only intended for a show, and it doesn't explain how Dru knows all the girls names. The movie is split into one main plot focusing on Gru, Dru and Balthasar Brat (BB). The second is the Minions running away from Gru due to him not taking up villainy after being fired from his job. The third involves Lucy and the girls, where Lucy is trying to become a good mother. I liked the mother side plot and the main plot but the Minions plot seemed unneeded and only there for laughs, as all it leads to is them popping a giant bubble gum bubble. The movies presentation is fantastic, although it's strange how the lively city holding a festival suddenly goes quiet as Dru steals a lollipop. The plot is overall good. It's a movie where you can watch it without dieing inside. Worth a watch if there's people with you, but not so much on your own.

If you have ever wanted to commit suicide without death, this is the movie for you!
This movie is atrocious, and not just because it's Go Animate. For starters, the Go Animation isn't even good. Lost of scenes are re used and cheaply put together, as well as being inconsistent. Lots of the time characters walk speeds are awkward and they sometimes are layered in awkward ways. The characters are also inconsistent, and the main ones aren't that better. They're all the same personality wise, but Dylan gets most action time, Emily does some stuff but is only there because LOVE PLOT RJDJD, and Kyle is funy funy xddddd!!! All the voices are horrible text to speech to add to all this. The story is straightforward, and very predictable. There are no twists, and a lot of the time characters are in unusually safe situations. For instance, it makes out Dylan may be in trouble for not being old enough to go into the resteraunt, but nothing is done with this. The few jokes that are there over stay their welcome by A LOT. Not even the horrible animation is funny enough to make up for the steaming pile of trash that is the "humour". The main villain, PC Guy, is planning to turn Go Animate city into his own, and make everyone hail him. While world domination plots are fine, it's never explained HOW it would be turned into "PC Guy City." A lot of the characters are also oblivious to this and don't do anything. You'd think some actual adults would deal with this but nope, teens.

This movie is terrible, and I would definetley not recommend it.

One aspect of the arcade mode truly ruins my rating.
(Reviewed on PS Vita) PlayStation Allstars is often overlooked and seen as a Super Smash Bros clone. However, while it may look similar, being a platform fighter, it plays extremely differently. You have three buttons to do main attacks which are all different, and X to jump. It's nice to have a wide variety of moves, but with gimmicky characters like SackBoy there are moves that actively encourage use of only one button. Even with other characters, you sometimes don't know what you're even doing and just spamming any attack. It's stunning even on PS Vita. The game has a large selection of fighters and 4 DLC characters. (I haven't bought any DLC so I can't give any feedback on them) Each character is very different and unique, apart from Cole and Evil Cole, who are just semi clones. While there is the normal fight mode and multiplayer which unfortunately I couldn't try out, arcade mode is by far the best mode. The stories, while simple, are good enough and it's nice to see them intertwine with another. You go through some fights, face a rival and defeat the polygon head...thing...these are all good fights, but some fights are ruined by just a CPU mode. In some fights, you'll fight one big CPU and two smaller ones. The big cpu will primarily go for you and drain your energy points. If you manage to get away it'll drain away the weaker CPU energy points. Energy points are needed to preform kill attacks, so this is a clear problem. While I only really experience this on legend mode, the other modes are a bit too easy for my liking. This kind of hard however is just unfair.

Because of the fact you can end up playing aimlessly, weird characters like SackBoy and the unfair CPU in Arcade, this game gets an 8, although if this site supported it I would've gave a 7.7. I'd recommend it if you can get online with it, or have friends who would play locally on a PS3.

Perfection.
This game is amazing. It's perfectly emulates how the normal home console versions play, on a hand-held device. It plays well, online capability, over 51 characters, challenges, and SMASH RUN. Oh my god, Smash Run is amazing. It even now has DLC! This game is amazing, and I highly suggest it for anyone. Smash Bros in your pocket.

This show is so good.
I love this show! All the characters are funny and most are unique ( I say most because of bland characters. I'm looking at you Teardrop. ) BFDIA was a bit random, but IDFB is out. IDFB is much more polished, and it's only on it's first episode! Would highly recommend to anyone! The thing with this show though is the animations is pretty simple, there are mistakes, and Ice Cubes lines are all re used. Any new lines are usually reversed re used lines.

Quite good!
This show does look a bit like Problem Solvers at first glance but does have funny parts. It's pretty underrated IMO. The pallet is a bit generic, being neon, but still okay. People seem to judge cartoons on art styles. Just because a show uses bright, neon colours doesn't mean it's a crap pile like the atrocity Teen Titans Go.