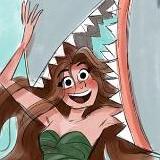 It's better than you deserve.
On the surface, it's an excuse to see cute girls almost naked. And that's fine for some people I imagine, if that's all they're looking for. You get to pick a girl, buy the body pillow and read the doujinshi.

But it's so much better than that. It's a legitimate sports/shounen anime with legitimate characters, legitimate arcs, and legitimate style. Yes, the eponymous fantasy sport is extremely contrived, no doubt, but each match is handled with such flare and glitz that the laws of physics and reality become a moot point.

The spectacle of the bouts is the show's centerpiece and its most unique strength, and this is accomplished primarily through its design. Everything is exaggerated, from the character's proportions to their specialized fighting styles. Everything is loud, vibrant and colorful, complimenting the over-the-top shounen story line beautifully. It's a show about girls hitting their butts together but it hits the same levels of creativity and intensity in its action as Slam Dunk, One-Piece, and Dragon Ball.

Not even just visually, but sonically it strikes this mark as well. Hits and special moves have such resounding impact because the sound designers matched the crazy animation with even crazier effects. I really have to give this department my admiration because they played this pseudo-comedy so straight, giving it just what it needed.

And that brings me to the other half of the equation, the comedy. I don't think I've ever laughed so hard during fight scenes. The absurdity (or as the show would put it "absurd titty") of it all only heightens as the show progresses. The best decision they ever made was keeping the characters totally unaware of the premise's strangeness, because, as mentioned previously, playing the situation straight is what makes it funny.

I think this is something that needs to be explained, because I could see cause for concern. While the girls themselves aren't aware of their goofiness, they aren't the butt of the joke (pun intended), rather the situation is. You aren't meant to sadistically laugh at these busty broads as they fight each other for your amusement, but instead become invested in their struggles and cheer them on.

What's funny is the show's total absurdity. When a girl's butt is visually represented as a hungry wolf, with barking and all, you aren't laughing at her but the idea of a butt wolf spirit. In fact, though the characters are fairly flat, their earnestness and idiosyncrasies are extremely endearing.

is it "fan service?" Well, duh. Butt isn't the point, it's just the means to entertain and subvert expectations. Similar to a John Waters film, so many people get stuck on the most eye-catching aspects that they never look at what it really is.

House is a once in a lifetime kind of movie.
I've seen it twice. It's a wonderfully crafted mishmash of thousands of cinematic tropes, ideas, and feelings packaged into 88 minutes of film. Yes, it is a movie with a plot, but like 2001, it's about the journey of interpretation and emotion that drives the film rather than resolving anything. It's goofy, horrifying, tense, lighthearted, crazy, but always perfect. I know the metaphor of a "roller-coaster ride" means almost nothing now-a-days, but it's the most apt comparison. It's like being shot into a haunted house on the moon in a different dimension. You will NOT see a single thing coming. I promise you. It's like watching a hour and a half trailer for a horror movie while you're on acid. None of this is hyperbole, but merely an attempt to accurately portray the film with a few words. Stop reading this review, get the highest quality copy of this film out there and watch it because there's nothing else to say.

Except maybe Kung Fu is best girl, but that's just like, my opinion man.

Successful at Everything
Is there anything that compares to Haurhi in modern Japanese animation? Honestly, no. It's such a brilliantly constructed deconstruction of not only Anime, but fiction in general that hits every single note just right. It's a journey, though we rarely travel beyond the school's grounds. Does it have faults? Yes, but only in the most tertiary, unimportant departments. There's no point focusing on them, just as there's no point in delving into the positives. If you like anime, you are essentially required to give this show a viewing, just like Evangelion ten years before.

If you read this review, even if you've already seen the show, please, if you ever cared about me, this random anonymous person on the internet, just please

WATCH THIS IN THE ORIGINAL BROADCAST ORDER.

You can find a guide on Wikipedia. This isn't personal preference or an appeal to tradition, it was deliberately designed to be viewed in that order. Pay attention, use your brain, and I promise you the experience is 10x more rewarding.

Inexplicably Excellent
Don't ask me. It's a movie about Big Foot joining a kid's middle school basketball team, if that doesn't strike your interest you may not have a soul. But, after seeing my 10 stars you've got to be wondering, "is it actually good?"

If you are a connoisseur of strange or unknown movies, you may be aware that bad comedies can be some of the hardest things to sit through. This is usually because when a comedy fails it fails in making its audience laugh, which for trash movies such as this one, is the entire point.

The premise is so beyond idiotic. It's literally Air Bud but with the missing link. And we're supposed to grow emotionally attached to the freaky ape thing as the film progresses. It's so simple and stupid I just can't help becoming enamored with it as it unfolds. I genuinely cheered for them at the end. It's not even irony, or post-irony, or any of that crap, I just want Picasso to win the big game.

All in all, a truly marvelous experience that deserves many more fans than it has. Highly recommended.

Intentional Fraud
If you're reading this review it's already too late. You've been duped by the distributor into thinking this is a real movie, which, as you should be aware, this most certainly isn't. This must have been Robert Napton's pet project. He probably always wanted to direct a movie and thought he might give it a go. While that's all well and good for him and the nice people he paid to shoot this during a rain free weekend, it simply isn't a real movie.

If you're one of the few people here bothering to look at this page without having experienced this first hand, you may be wondering, "how is this not a 'real movie', exactly?"

Oh, let us count the ways.

The most striking absence is in the lighting department. By that I mean they didn't have one. Every single shot is flat. Everything is evenly lit, at all times. It's the visual equivalent of Nyquil. I wouldn't be surprised if Napton himself just wandered around with a camera, picked a random bush to stand by, and yelled "action!"

Speaking of bushes, I suspect this was filmed in and around his own home. The entire film's events take place within a few acres of the Lopez estate with the same four or five locations reused over and over again. It's probably all they had to work with.

The acting is amateurish, as well. I'm not trying to sound like a jerk, I mean they were literal amateurs doing their best in this pretend movie. The only noteworthy performance was Giovanni Lopes as the priest. I wouldn't call it good acting, but he was the only remotely human thing about this mess.

And it is a mess, but that doesn't mean I want to slam it as some travesty against the medium. All it ever wanted to be was a horror fan's attempt at making their own horror movie. Good for him, he went out and got something done, even if it sucks, it's more than I can say.

But this should never have gotten a real release. In the same way you strumming on a guitar pretending to be Bob Dylan shouldn't have it's own vinyl. This is a scam, plain and simple. This company spent basically zero dollars getting the rights so that they could slap a nice looking cover on what they knew wasn't a proper film just to cheat you out of your money. Well, sucks for you guys, I got this at Goodwill.